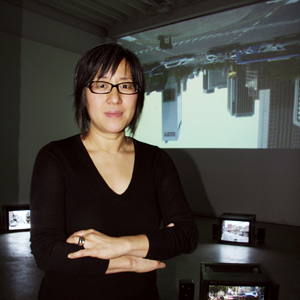 JIN-ME YOON is a vital member of the Vancouver art community as well as an active participant in international art discourse, for the past two decades her work has contributed to ongoing discussions of place and identity. Well-known earlier photographic works, such as Souvenirs of the Self (1991), use subtle humour and irony to tackle head on the narrative foundations of Nation and the very terms of inclusion as to who belongs “naturally” to these iconic Canadian touristic landscapes.

Along with many other artists in the 1980s and early 1990s, Jin-me Yoon’s work has critically foregrounded – through formal and conceptual means – the processes of racialization as well as sexual difference to subvert stereotypes and dominant discourses. Jin-me Yoon’s more recent video work explores the interrelationship between bodies, cities and history in an accelerated globalized era. In The dreaming collective knows no history (U.S. Embassy to Japanese Embassy, Seoul), 2006, she explores the city of her birth by formally tipping the vertical axis of the city and humans onto a horizontal plane. Rife with historical and contemporary references and associations – the movement of peoples, information and goods – the smooth flow of progress and power as well as the frantic pace of production and consumption are interrupted.

Jin-me Yoon has exhibited extensively nationally and internationally. She lives and works in Vancouver, teaching at the School for the Contemporary Arts at Simon Fraser University. Jin-me Yoon is represented by the Catriona Jeffries Gallery.